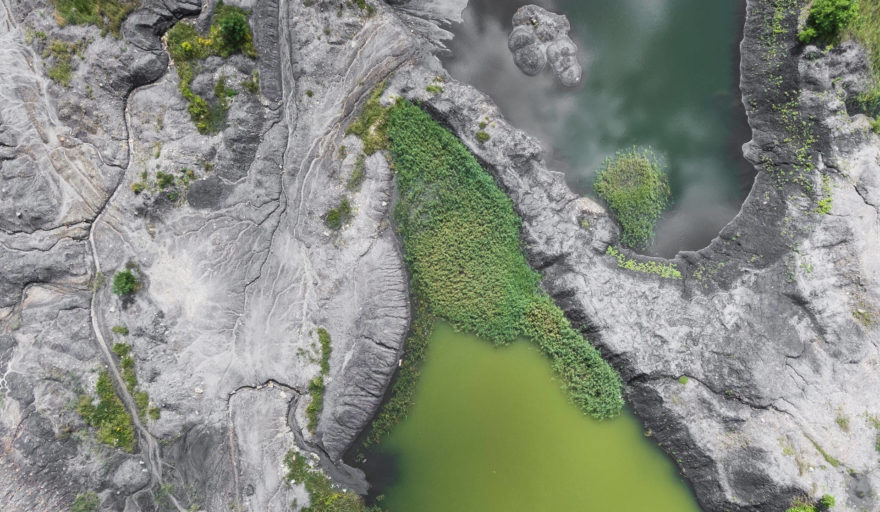 Hydropedology and the value of hydropedological surveys

Hydropedology is the relatively new, interdisciplinary research field which focuses on the interactive relationship between soils and water (Figure 1). Soil physical properties (hydraulic conductivity and porosity) have an important impact on the occurrence and rates of hydrological processes, whereas hydrological processes play an important role in the formation of soil morphological properties (colour, mottles, macropores and carbonate accumulations).

Accurate mapping and interpretation of these soil morphological properties can be used to conceptualise and characterise hydrological processes, such as water flowpaths, storage mechanisms and the connectivity between different flowpaths.

Most of these hydrological mechanisms and processes are very difficult to observe (let alone measure!) in the field because they are dynamic in nature with strong temporal and spatial variation. However, soil morphological properties are not dynamic in nature and their spatial variation is not random, thus making soil properties the ideal vehicle for predicting and conceptualising hydrological processes.

One of the most important contributions of hydropedology is the holistic understanding of the hydrological functioning of landscapes (catchments or hillslopes) and being able to conceptualise (visualise) these hydrological processes spatially – i.e. not only 1-D mechanisms. 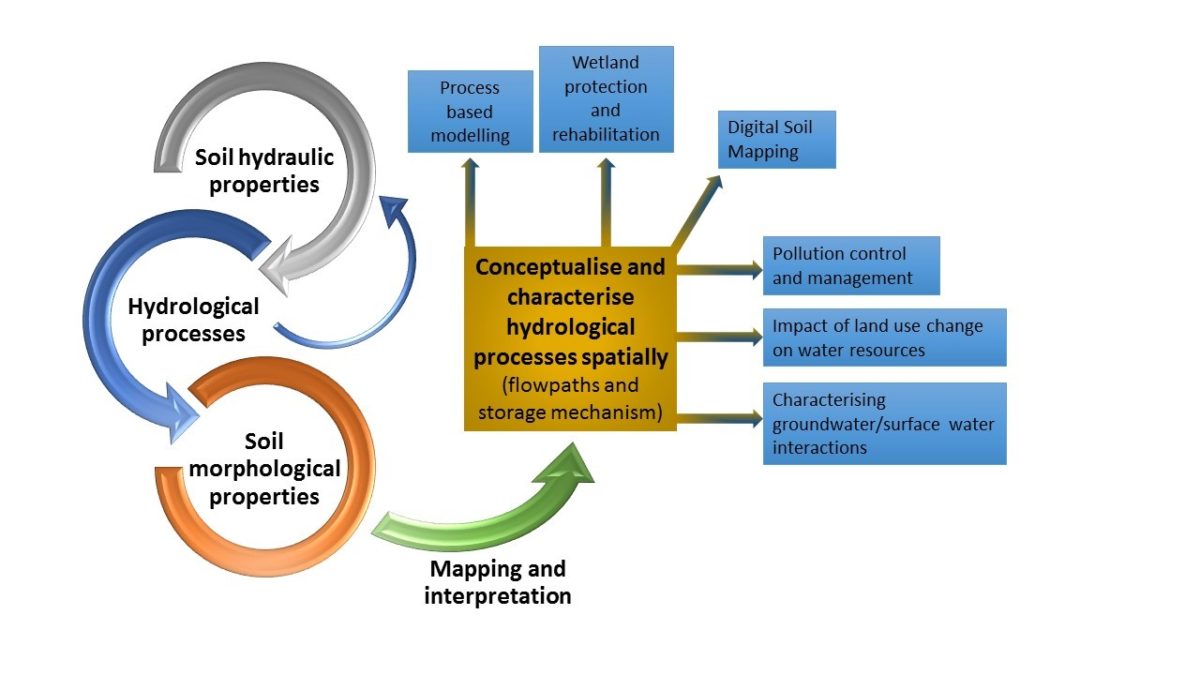 Figure 1: Hydropedology and some of the applications of hydropedological surveys.

In general, hydropedological information assists with effective water resource management, as required by the National Water Act (1998), through improved understanding and characterisation of hydrological processes.

To obtain hydropedological information the soil types must be identified, hillslope information obtained and of cause surveys are important:

The hydropedological behaviour of different soils can differ significantly. For example in Figure 2a, the red colours of the top and subsoils of are typically associated with freely drained soils. Vertical flow into, through and out of the profile are the dominant hydrological pathway. These soils are termed recharge soils, as they are likely to recharge groundwater, or lower-lying positions in the regolith, via the bedrock. 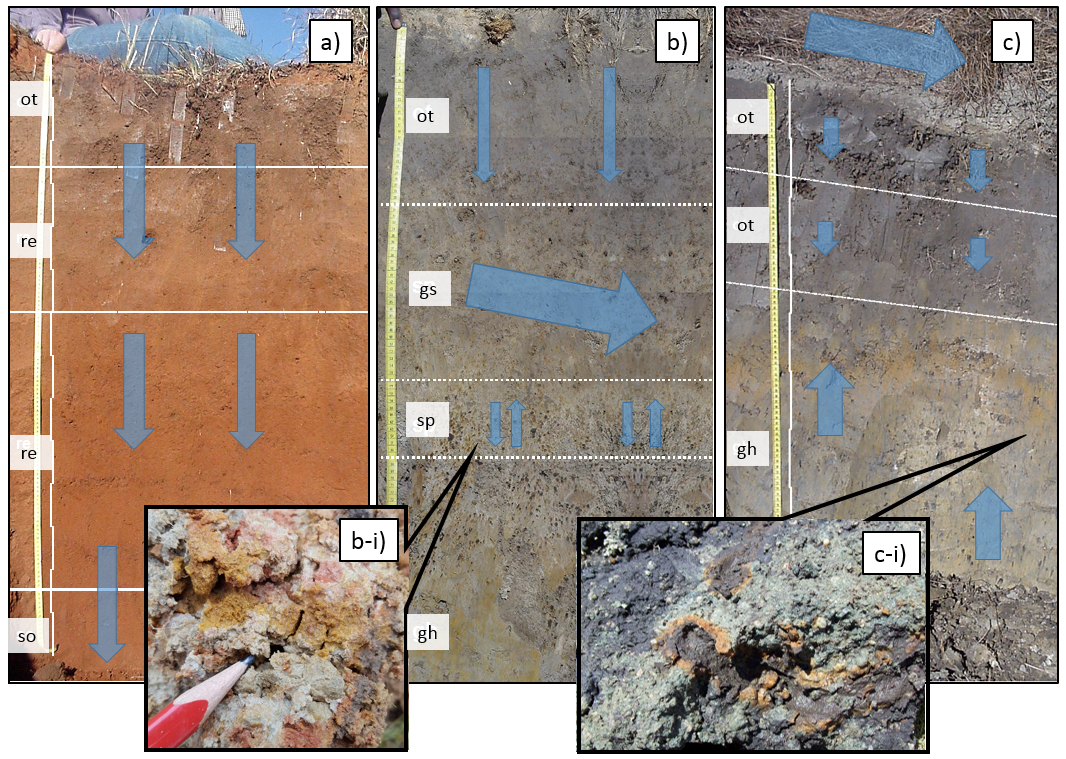 In the second example (Figure 2b), lateral flow is likely to be dominant. These soils are termed interflow soils. Lateral flow occurs due to differences in the conductivity of horizons. In Figure 2b the ‘sp’ is restricting downward movement and lateral flow occurs at the A/B horizon interface. The lighter colour of the ‘gs’ horizon is further support that lateral flow dominates. Lateral flow frequently occurs on soil/bedrock interfaces due to the permeability of the rock. Mottles (red, yellow and grey colours) in the ‘sp’ horizon (magnified in Figure 2b-i) is the result of a fluctuating water table.

In Figure 2c the grey colours of the ‘gh’ horizon and the dark colours of the topsoil horizon are indications that this profile is saturated for long periods. Because these soils are close to saturation, especially during peak rainy seasons, additional rainfall is unlikely to infiltrate the soils but will flow as overland flow (or surface runoff) downslope. These soils are termed responsive soils due to their rapid response to rain events. The same type of response can be expected on very shallow soils i.e. a small amount of rain can saturate the soil and additional rain will drain away as overland flow.

For effective water resource management, it is important to gain a holistic understanding of hydrological processes. Figure 3 presents a typical example of the hydropedological response of a hillslope.

In the recharge zone, the dominant flow direction is vertical through the soil and into the fractured rock, from where it can recharge groundwater levels or downslope positions in the hillslope soils. Lateral flow at the A/B horizon interface or soil/bedrock interface dominate in the interflow zone. The responsive zone is fed by lateral flowing water from the interflow zone as well as via the bedrock from the recharge zone. 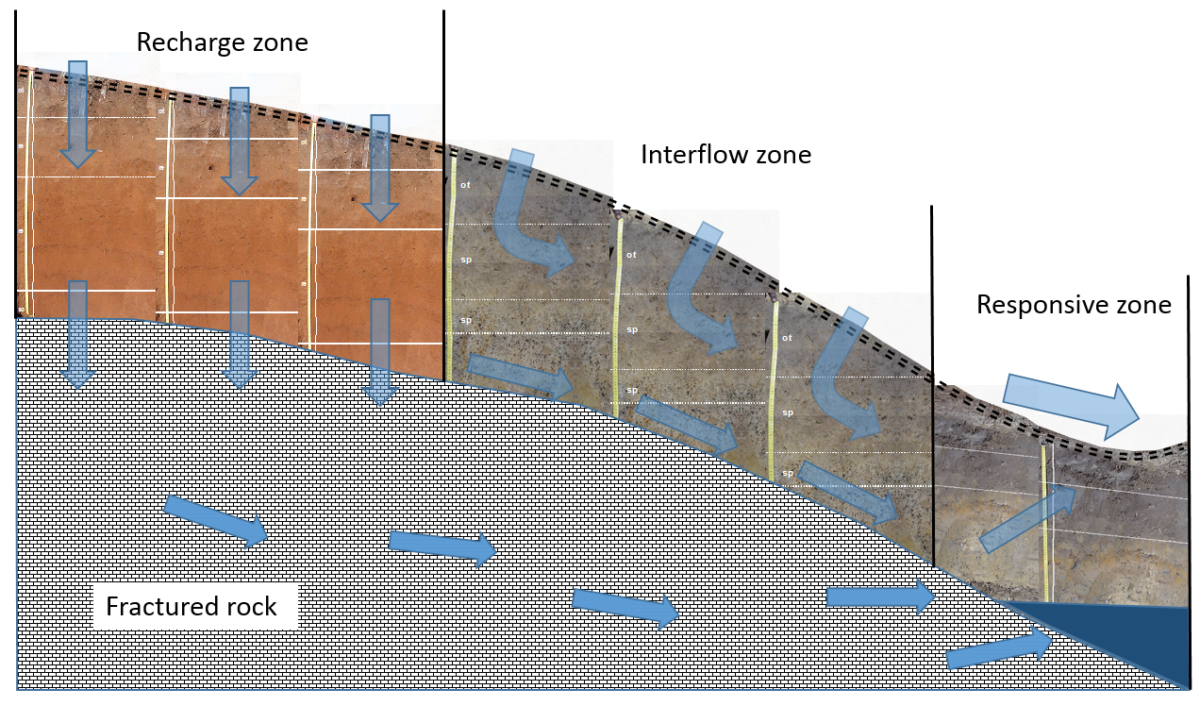 Although Figure 3 represents an oversimplification of a fraction of the complex hydrological cycle, the application of this information can make important contributions to effective management. Four scenarios are presented to support this statement:

Hydropedological information can thus be used to ensure that the model configuration properly reflects the hydrological processes. This can be critical in simulating low flows, where vegetation may have access to near-surface water and thus limit contributions to streamflow.

Although the impact of land-use change cannot always be avoided, hydropedological information might aid in managing and protecting the hydrologic drivers of the ecosystem and thereby minimise negative impacts.

A hydropedological survey (in the context discussed above) is different from a conventional soil survey in the following aspects:

In conclusion, hydropedological surveys and the interpretation and application of hydropedological information can be a cost -and time effective approach to conceptualise and characterise hydrological behaviour of landscapes.